You guys, I am geeking out. Big time. I spent part of Sunday afternoon hanging with the folks who make this weekend’s 2016 FIS World Cup Freestyle Event.

While I was taking some solo ski laps off of Carpenter Express chairlift, I spotted a group of people in World Cup FIS Freestyle jackets. I skied over, introduced myself, and met Evan, Devan, Camie and Raymond. I asked how their day was going. “Great! We were working on three jumps and prepping the landing hill,” Raymond said. “Time for lunch.”

They were kind enough to pose for a photo, before skiing off and I was thrilled to have had a chance to meet them. The athletes, truly impressive, get a lot of well-deserved acclaim, but these are four of many unsung heroes of the sport, building the field of competition, to spec, according to the rules of FIS. 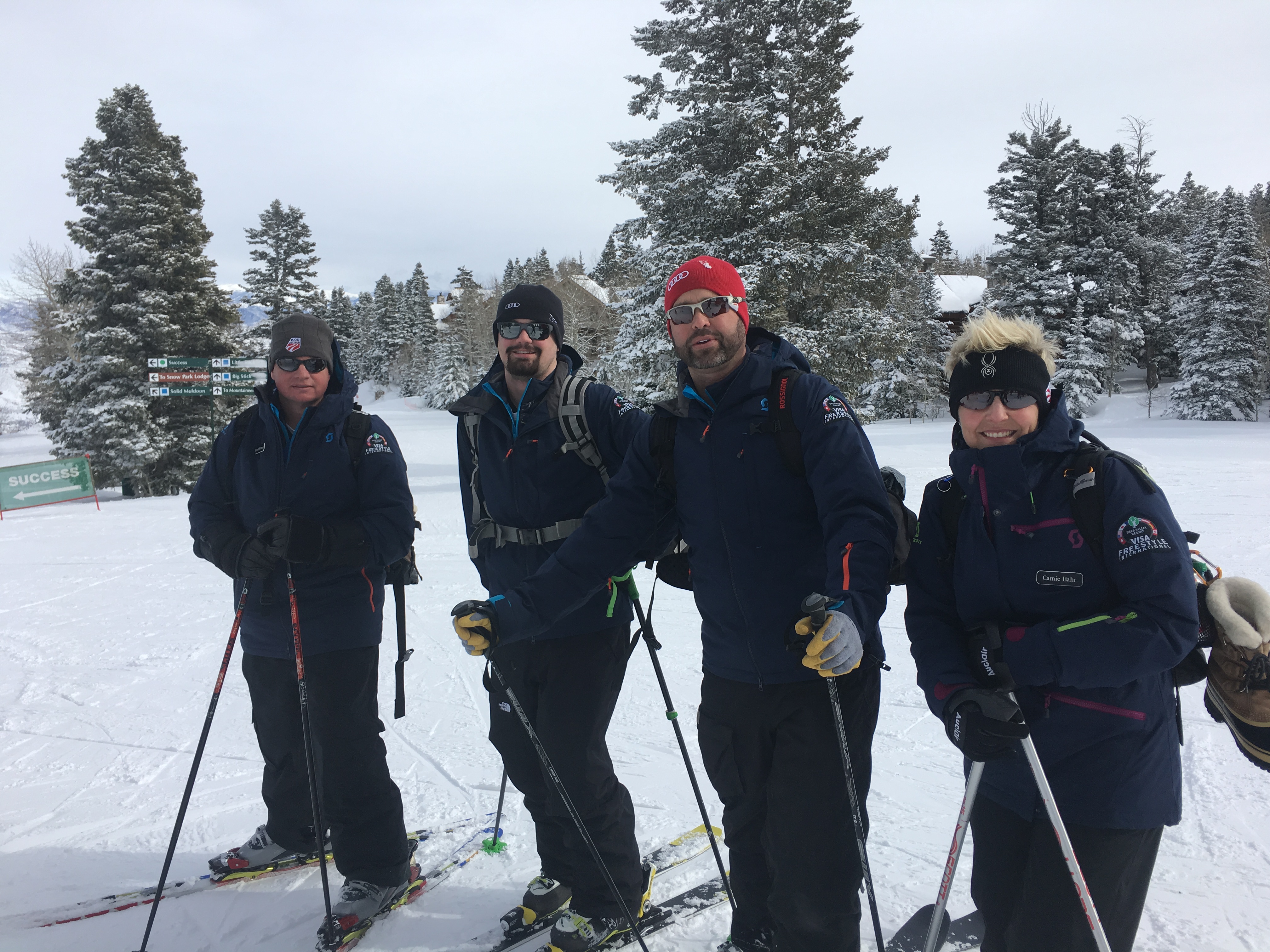 We said our goodbyes, and I zoomed off to slay Big Stick ski run. Its soft, delicious snow didn’t disappoint, and as an added bonus, I had it to myself. Top to bottom. I paused after finishing the run to take in all the preparations that were taking place on Champion ski run for the moguls, and White Owl ski run for the aerials.

Lucky for me, Chris Cowan, mountain venue operations assistant manager, was there, supervising the action, and he offered me an up-close tour of the aerial jumps and landing area.

I couldn’t resist the offer of a VIP backstage tour. “You have two choices, we can walk up those stairs, and there are 100 of them,” he suggested, gesturing to the far side of the landing area on White Owl ski run. “Or, take a lap on Solid Muldoon and I’ll meet you at that rope, next to the snow cat.” Climb stairs or ski more? No brainer. I took a lap.

I won’t lie, I giggled with anticipation all the way up the chair lift ride, and all the way down Solid Muldoon ski run. Chris waved me under the rope, and I clicked out of my bindings to walk the wonderland of activity. According to Chris, the initial jump-build takes two days, starting with the construction of a matrix of concrete forms, to create the outline of the jump block. The next process involves two Snow Cats; one pushes snow piles in front of the jump form, and the other Cat is equipped with a large snow blower attachment in place of the blade. Snow is blown into the jump forms the same way someone would snow blow their driveway, just on a larger scale. There are roughly 15 event crew and volunteers on the ground with hand tools moving the snow that is blown into the form. Water from the snowmaking system is also used during the build to help the jumps setup and harden the snow. The build is followed by another day or two of final hand shaping.

And this was where I came in. There was a snowcat, working on the in-run. A couple of guys were working with a chainsaw, to cut out stairs within the ramps, so that the specs can be checked throughout the weekend. “They climb up the stairs and put a level on it, to make sure the bubble is straight, all across the top of the ramp,” Chris explained. “Every one of these people working on the run is a former athlete, a coach, a superstar, one way or another, in the sport. It’s a labor of love.”

And, lucky for you, I caught some of my tour on video, so you can share in the VIP access. Here’s Chris describing the snowcat grooming, and the three sizes of jumps, at the venue. Watch to the end for the incredible views…

Next, he invited me to the top of the landing area—no kidding, it’s steep.

Finally, we looked at the speed check area. Athletes can reach heights upward of 50 feet, and they spend a lot of time with their coaches determining how high to start, for a given jump and trick. Here’s Chris, talking about the process of speed check.

Yes, it’s a lot of work. But, Chris insisted that it’s so much fun, nobody minds the taxing work, or the long hours. And, not for nothing, but here’s the amazing view the team has while they work. 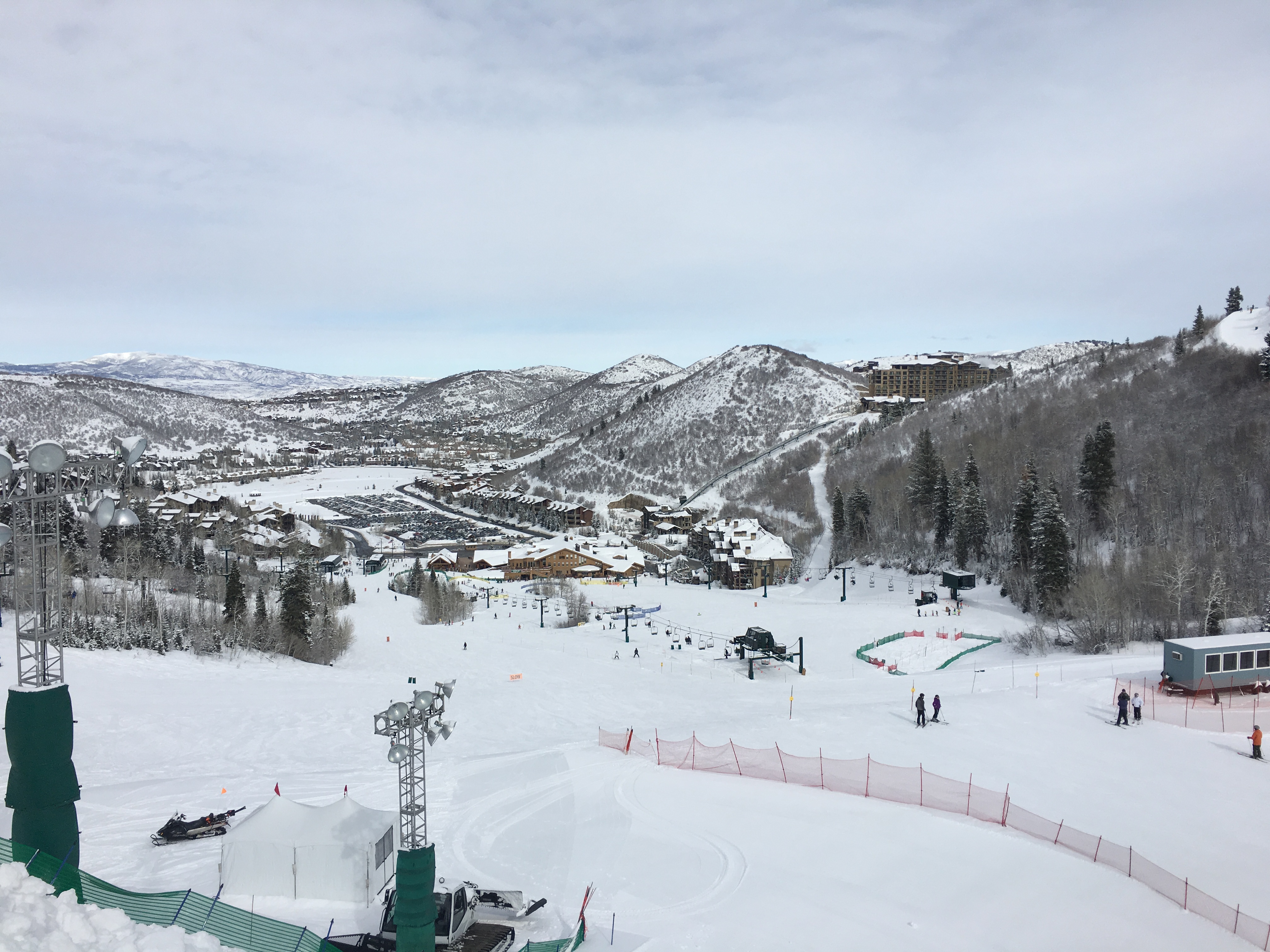